After having the clocks replaced under warrenty due to misting up, the headlight wiring melting inside the housing, battery power drain issues and another unknown engine clatter issue, I decided to sell the bike.

Although this bike is a budget bike designed to do a bit of everything, i believe it is seriously lacking in the quality control department! I feel that a budget bike ( or any bike for that matter ) should be reliable and robust, and the himalayan ( at least mine ) falls short in this area. Simple things that shouldn't be an issue are an issue with these bikes. Clocks, batteries, gaskets, wiring, plugs etc etc.. They are small issues that ruin an otherwise good bike. Would i recommend the Himalayan? Yes, but not as an every day bike! as a green laning, sunday toy.

There seems to be so many small problems/issues with theses bikes that should not crop up on a production machine. To date i have had the following issues:-

Since having the ECU replaced:-
Sometimes cuts out when pulling off
Missfire when cold and runs very rich - slight pinking
Erratic idle ( anywhere between 1000rpm and 1500rpm )

First major problem with the bike after roughly 7 months of ownership. The bike will now not start but the ignition/fuel pump/starter motor does turn. There appears to be no spark, but both the coil pack and HT lead/Plug test fine. Flicking the kill switch both ways allows the bike to start for a few seconds then die, so looks like a possible broken kill switch or possibly something more serious? Guess we will see.

I have a few mods planned before winter arrives, mainly for visability and comfort when riding in the cold and dark.

The bike has loosened up a lot more, and seems to pull a lot easier. The exhaust has bedded in and sounds much deeper ( Like a proper single should! ) The more i ride this bike, the more i enjoy it.

The engine does sound a bit noisy, but its over due its service which should quieten it down a fair bit!

The petrol tank still rubs the ABS line, even with some extra pipe placed over the lines. Moving the bracket slight that holds the lines seems to have helped.

The paint on the sides of the petrol tank has worn more and is now slightly glossy in comparison to the rest of the tank. I would highly recommend adding some tank protectors as soon the bike is purchased rather than after a few thousand miles of use! This could be down to wearing leather trousers and not textile.

About
A go anywhere, do anything kind of bike. Back to basics with modern features, such as ABS and Fuel Injection. The low seat height makes it an ideal bike for those who like the enduro style, but are a bit short in the leg ( Me included! )

Small Issues?
A couple of small issues have cropped up in the short time of owning this bike, all of which have been an easy fix.

Headlight rattle - Only occured when switching the standard bulb out for an alternative one. This was resolved by fitting a thin strip of foam tape around the inside of the headlight bowl, thus dampening the vibrations.

ABS line rubbing - The ABS lines from the front brake route along the inside of the petrol tank, next to the frame. As there isn't a huge amount of room next to the tank, the brake lines rub slightly. This was fixed by cutting some spare pipe and placing over the lines.

Front mounting framework - Slightly uneven on one side, unbolt and move across.

Paint quality - scratches easily and slightly worn where legs meet tank. Rust behind the clocks and footpegs ( inside steelwork ) as tubes are open! Spray inside with ACF-50 or alike.

Real Problems?
Nothing so far! 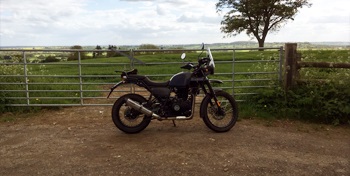 By using this site you accept the use of cookies for analysis, customized content and advertising.  Accept  More information